It had been a while — 315 days to be exact — since Detroit Lions quarterback Matthew Stafford had thrown a pass to tight end T.J. Hockenson in a game.

Sure, they had gotten some practice during training camp and offseason workouts that Stafford organized. But no one knew how good their chemistry would be in the season opener, given the major irregularities of the offseason.

But Stafford and Hockenson looked like they were in midseason form Sunday, and their production was one of the highlights in a 27-23 loss to the Chicago Bears.

Week 1 review: How no crowd noise impacted Lions vs. Bears 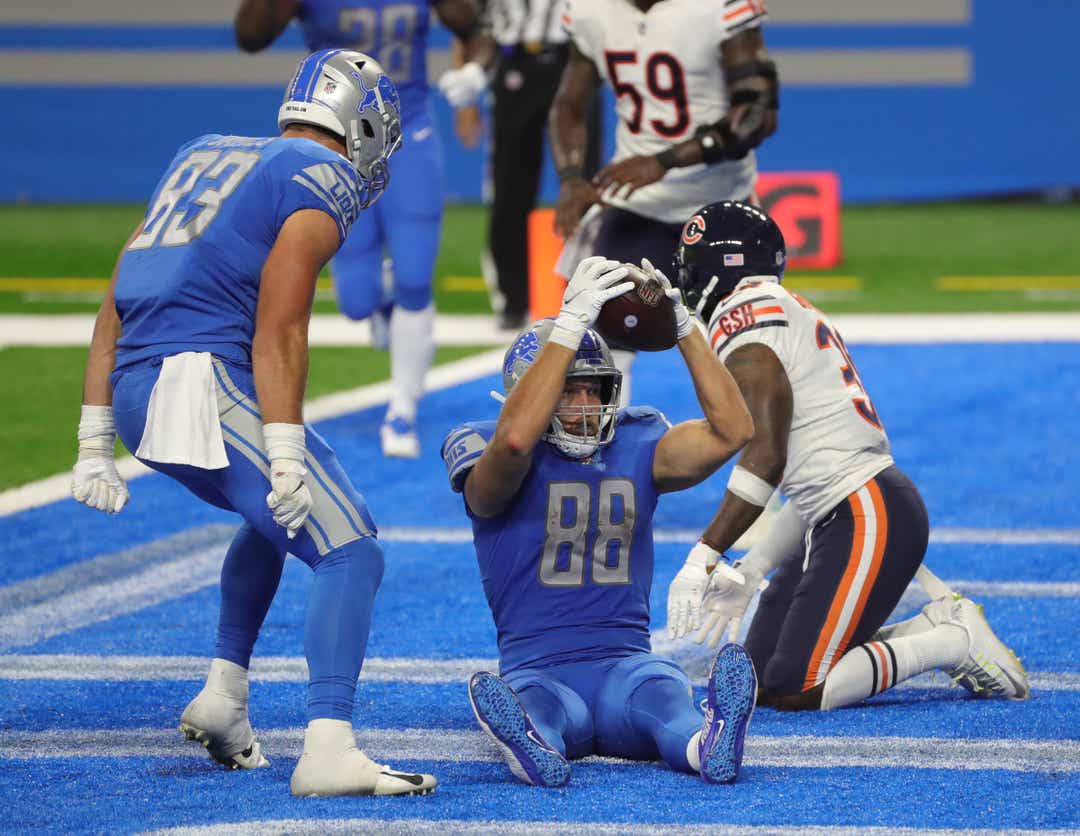 “They’ve done a good job since we’ve gotten back at camp, really just working together,” coach Matt Patricia said Thursday. “There’s a lot of periods during practice where, maybe special teams where they’re not involved, and the two of them will take some of that extra time to go work on the nuances of routes or reads, coverage looks and some game plan stuff that we do in those situations. I think all just those extras that add up through the course of practice and being on the same page help during the game.”

Did it ever. The two appeared to be in lockstep throughout the game. Hockenson caught five passes on five targets for 56 yards and a touchdown. And two of his catches were among the Lions’ 10 longest plays.

“Certainly in some of the game plan plays that we had,” Patricia said, “I thought were well-designed to try to get T.J. the ball, and some of those situations were really good. I think those guys spend a lot of time on them in the meeting room, but on the field during the extra stuff, not just during the team periods.” 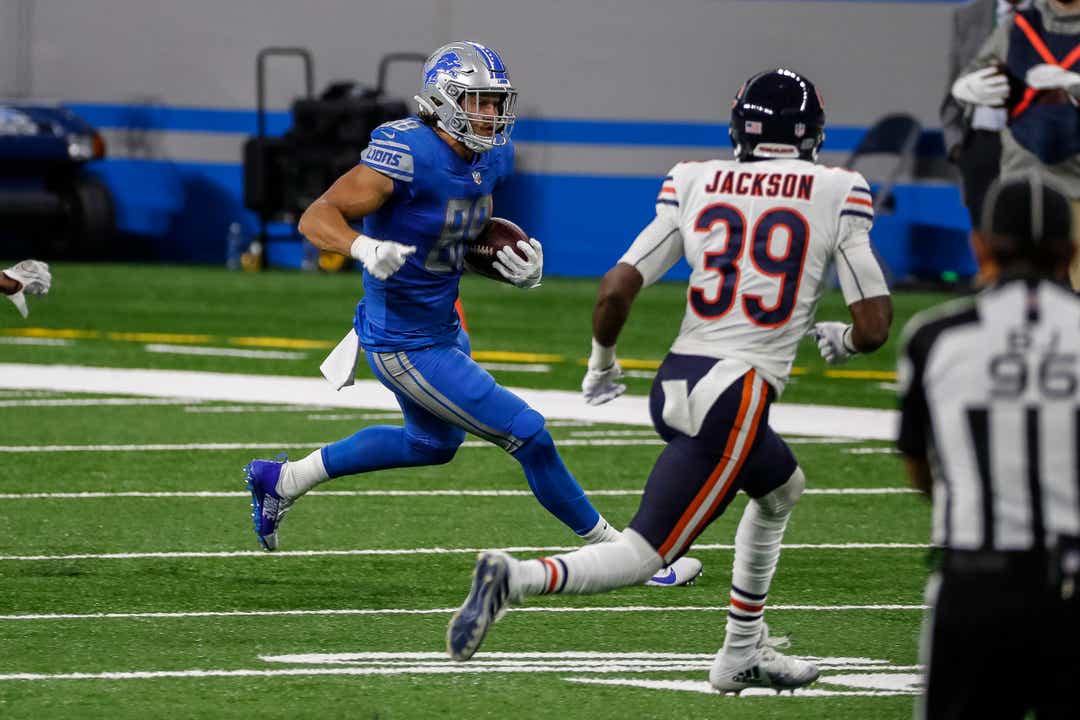 That chemistry was apparent Sunday. The Bears had a hard time containing Hockenson throughout the game and the creative play-calling certainly helped.

But it was one of Hockenson’s more mundane plays that exemplified his work with Stafford and the trust they’ve developed. With the score tied at 3 in the second quarter, the Lions ran a play-action pass on first down from their 39-yard line. The Bears’ four-man rush penetrated quickly and Stafford was forced to throw off his back foot. Hockenson was behind the line of scrimmage and the only viable option. He caught Stafford’s quick pass and ran for an 8-yard gain.

Hockenson’s touchdown catch also showed how much trust Stafford had in his second-year tight end. Despite tight coverage, Stafford zipped a hard pass up the middle on second-and-goal from the 4-yard line for a 20-6 lead in the third quarter.

“Yeah it was good,” Stafford said Wednesday of his chemistry with Hockenson. “Coach did a nice job drawing up some play to get him some chances and he capitalized on them. His touchdown, he’s probably the most-covered guy on the field. I jammed it in there to him, but it was a nice catch. I was happy for him.”

Stafford and the Lions will need as many of their weapons playing well if they want to keep pace with the powerful offenses they’re about to face, starting Sunday with the Green Bay Packers, who have the NFL’s top-ranked scoring offense after Week 1.

But Hockenson represents something a little different. As the eighth overall pick last year, he represents a sizable investment from the franchise and a key building block for the future.

“Obviously the more guys rolling and playing at a high clip that we can get on offense, the better we’ll be,” Stafford said. “T.J.’s one of those guys that’s a weapon for us and we’ve got to make sure everybody on our offense is getting touches and we’re going from there.”

Former Lion Jessie Lemonier has passed away at age 25
Aidan Hutchinson Season Highlights
Addressing the absolutely wild Tom Brady to the Detroit Lions theory
NFL executive predicts Detroit Lions to ‘do some damage’ in next year’s playoffs
Open thread; Would you ever want the Lions to play their home games outdoors?