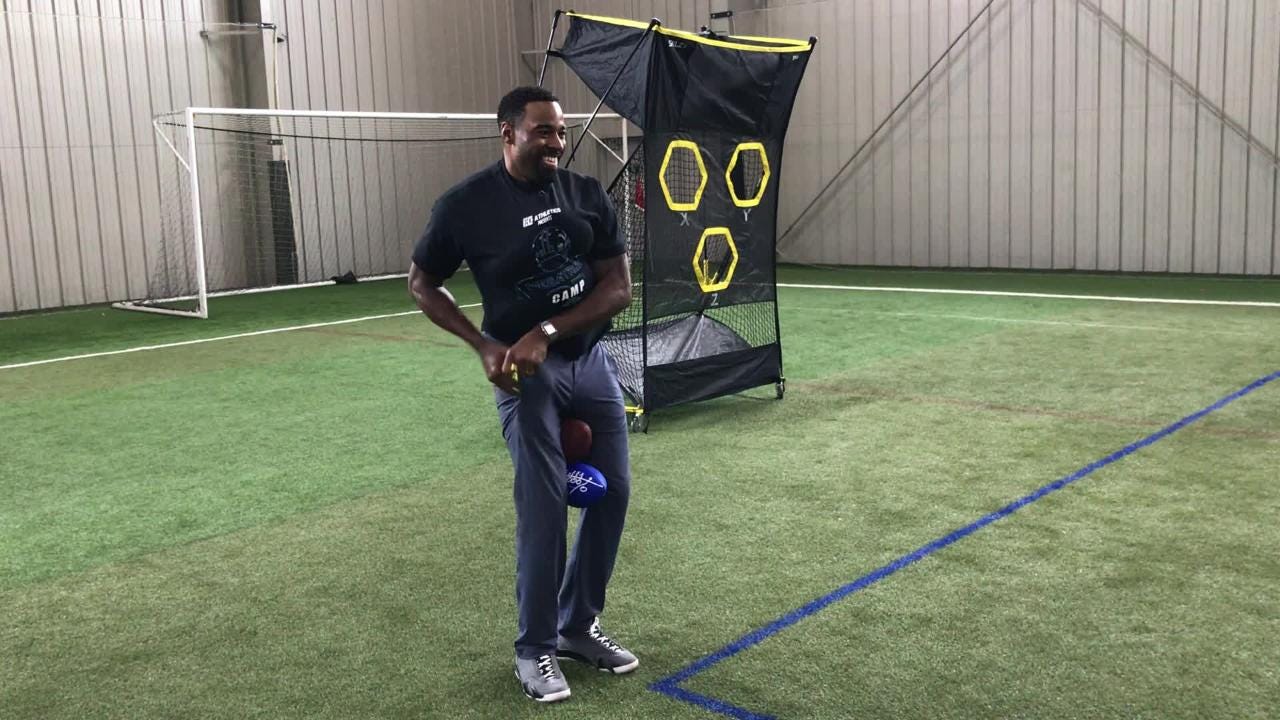 Detroit Lions wide receiver Calvin Johnson was announced Saturday night as a member of the Pro Football Hall of Fame’s Class of 2021. The selection comes in his first year of eligibility for the Hall, and he’s the first modern Lion elected to the Hall since Barry Sanders in 2004.

Like Sanders, Johnson retired earlier than usual, leaving his career statistics (135 games, 731 receptions, 11,619 yards, 83 touchdowns) seemingly short of Hall-worthy — at least on the first ballot — at first glance. After all, Johnson only ranks 47th in career catches, 32nd in receiving yards and 23rd in receiving touchdowns. (Though, with 1,964 yards in 2012, he still holds the NFL record for single-season receiving yards.) But those career ranks don’t necessarily capture his dominance in individual games, on display in each of his nine seasons as a Lion.

HALL CALL CASE: From the coaches who faced him

‘TEARS ON MY FACE’: The moment Calvin Johnson learned he was elected to Pro Football Hall of Fame

With that in mind, here’s a look at Johnson’s five best games in Detroit:

Entering this Week 15 game in Johnson’s fifth season, the Lions had as many wins in 2011 — 8 — as they’d had in the three previous seasons combined, and the playoffs were finally within sight. A win would let the Lions clinch with one win in their final two games. So, of course, the Lions trailed by 13 with 7:47 remaining in Oakland. Enter, Megatron.

Johnson already had five catches (on 10 targets) for 115 yards. As the Lions began a 71-yard drive, Johnson drew a pass interference call to get the Lions near midfield, then hauled in a 24-yarder to move into the red zone five plays later. Five plays after that, it was a one-score game. On the Lions’ next drive — starting from their own 2 — he fully took over. First, a 21-yard toe tap on the sideline to get them to the 39. On the next play, a 48-yard bomb after he’d snuck behind the secondary to get the Lions into the red zone. Then, a 17-yard pass interference call to the 6 as Oakland corner Stanford Routt all but tackled Johnson before he could reach the ball in the end zone. And then, of course, the winning touchdown, caught over his shoulder on the run in the back of the end zone.

All told, on the Lions’ final two drives, Johnson caught four passes for 99 yards — more than he’d had in his previous two games combined — and drew two flags for 31 yards. He finished with nine catches for 214 yards (his first of five 200-yard games) and plenty of superlatives from his teammates: “I said before the game that he’s the best,” receiver Nate Burleson said. “He’s the greatest to ever do it and he proved that today.”

Johnson’s postseason resume is short, with only two games to choose from. (And yes, in true Lions fashion, that total of two playoff appearances is at the bottom of Hall of Fame receivers.) But he was excellent in both, averaging 17.4 yards a catch in the postseason. His playoff debut, however, was epic, as Johnson pulled in 12 catches (on 15 targets) for 211 yards and two touchdowns — one of eight 200-yard playoff games by a receiver all-time. And even though the game ended in a blowout in New Orleans, that was hardly Johnson’s fault.

In the first half against the Saints, he had five catches (on seven targets) for 74 yards and a touchdown as the Lions built a 14-10 lead. After the half, as the Lions’ defense was shredded by the Saints, Johnson was still effective, with six of his seven second-half catches going for at least 10 yards and a first down (or a touchdown). Still, Johnson was understated when reviewing his performance after the game: “They throw a lot at you defensively and tonight I was able to get open a lot more and make plays.”

Although Johnson missed only nine games over nine seasons, injuries were a weekly issue, as they were in this one; Johnson entered the game with a sore left knee and took two big blows to the head, including one that, as the Free Press’s Dave Birkett wrote, “left him sprawled briefly on the turf clutching his helmet.”

Still, he was the most effective part of the Lions’ offense, catching 12 passes on 13 targets for 207 yards and a touchdown. (The Lions’ other offensive skill position players combined for 60 yards rushing and 117 yards receiving.) Of Johnson’s dozen catches, 10 were for 11 yards or more, including a 50-yarder in which Johnson took a vicious blow from late-arriving safety Harrison Smith. After the hit, he caught six more passes for 101 yards, though he did surrender a comeback-killing fumble in the fourth quarter.

Johnson refused to discuss injuries, though: “Man, I ain’t talking about nothing injury related,” he said five days after the loss.

In one of just two wins on this list, Johnson fell just 8 yards short of setting an NFL single-game record for yards receiving – and he only needed 14 catches and 60 minutes to do it. (Flipper Anderson, the record-holder, caught 15 passes for 336 yards on Nov. 26, 1989, including two catches for 40 yards in OT.) Johnson entered the game the perceived victim of a diss from Dallas receiver Dez Bryant, who said early in the week that he could do anything Johnson could do.

Bryant apologized before the game, but Johnson dismissed the diss — and Bryant — afterward, saying, “I didn’t know what he was talking about when he texted me because I don’t really pay attention to the media that much.

“I’m just going out there doing my job.”

If you needed an example of how Johnson made the Lions offense go when he was at his best, the second quarter of this game would be a good example. Johnson had five catches for 163 yards and two touchdowns — including a 79-yard bomb on which he shook off a CB throwing himself into the tackle — and the Lions scored 27 points.

He was only targeted three times — all incomplete — in the second half, however, as the Lions didn’t score again. Johnson finished with six catches (on 13 targets) for 179 yards, all in the first half.

Even after his team’s mid-November victory, Pittsburgh coach Mike Tomlin didn’t have an answer on how to stop Johnson: “It might just have been what they didn’t do. The guy is an awesome football player.”

JOIN US: Live fan Q&A with new Lions RB Jamaal Williams!
Breaking down 3 realistic first-round scenarios for the Detroit Lions
How many different picks at 7 would be acceptable for the Lions?
Notes: NFL players, Jeff Okudah weigh in on proposed jersey number changes
Mailbag: Who are some mid-first round options if the Lions trade down?