Duce Staley was coaching running backs for the Philadelphia Eagles when the team’s longtime vice president of security, Dom DiSandro, invited him to a high school football game years ago.

DiSandro was friends with the father of a top running back recruit at nearby St. Joseph’s Prep, and he asked Staley to come along for a look.

“He was awesome,” Staley recalled. “He was able to do what special players do on that level, and that was make everybody miss, including the referees.”

[ Dan Campbell loads Lions’ staff with ex-players: ‘They’ve been in their shoes’ ]

Swift led the Lions with 10 touchdowns as a rookie and finished second with 521 yards rushing despite missing three games with migraine headaches, and the team appears to be counting on him to play a bigger role in 2021.

Both Staley, now the Lions assistant head coach and running backs coach, and new offensive coordinator Anthony Lynn sung Swift’s praise Wednesday as a “three-down back,” though Lynn insisted his reputation as a run-first play caller is overblown.

“I know that being a former running back and all, that narrative kind of has followed me has been a ground-and-pound guy,” Lynn said. “And yes, I’ve rushed for a lot of yards in the last decade, but I believe in this league, the defenses are too good to be one dimensional. You have to be balanced in your attack, in your approach, and that’s going to be our intention.”

Lynn played six NFL seasons as a running back and has overseen a variety of offenses in the NFL.

He said he called about a third of the offensive plays as Los Angeles Chargers head coach the past four seasons, when the Chargers finished as a top-10 passing offense all four years. L.A. led the NFL in passing in 2017, finished sixth this season with a rookie quarterback, and never once had a top-10 rushing attack. 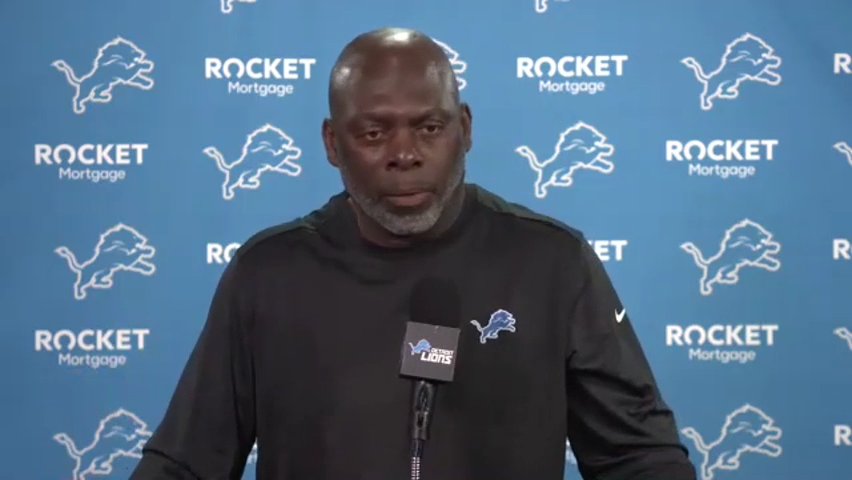 New Detroit Lions offensive coordinator Anthony Lynn had a great answer Feb. 10, 2021, when asked about balance on that side of the ball.

Lynn did call plays as offensive coordinator of the Buffalo Bills for 14 games in 2016, after Greg Roman was fired. The Bills led the NFL in rushing yards (164.4 ypg) and touchdowns (29) that season, and finished second in attempts (30.8 per game).

Philosophically, Lynn said his approach as play caller is to do whatever it takes “to win damn games.”

[ Why Lions’ running game could do some ‘damage’ under Anthony Lynn ]

For the Lions this fall, that might mean relying on Swift, the running game and an offensive line that Lynn acknowledged is the strength of the offense right now.

Lynn tread carefully when talking about new quarterback Jared Goff, whose trade from the Los Angeles Rams will not become official until March. But he said “it’s very possible” the Lions’ 2021 starting quarterback — expected to be Goff — will be on the roster before the draft.

“I think everyone knows what the rumors are and what’s been said and everything,” Lynn said. “I can’t talk about that because he’s not on our team, but I was in L.A. with the young man. I know he’s a winning quarterback. He’s a No. 1 pick for a reason, so good player.”

Goff was most successful with the Rams when he was flanked by Todd Gurley and one of the league’s best running games, and the Lions are hoping Swift can make a similar impact this fall.

SIT, ROOKIE: If Lions pick a quarterback at No. 7, he may not play immediately

LISTEN UP: Tom Brady’s success could be a valuable NFL draft lesson for Lions

Lynn said Swift can be even more involved in the passing game than he was as a rookie, when he tied for third on the Lions with 46 catches, though he said the Lions need to “find someone else to go with him.” And Staley said Swift has “special traits” that should allow him to be a 25-touch-a-game back.

“A lot of people think you got to go have 20 carries as running back to be successful, and sometimes you do,” Staley said. “But touches, when you have a good back, an electrifying back, touches are definitely more important. You can get 18 carries and seven touches as far as receptions and you have 25 touches, which is what you want from your star back. When I look at D’Andre, I do think he’s a three-down back and like I said, he has some special traits I can’t wait to get my hands on, so I’m excited about that.”