In a normal year, the Detroit Lions’ players would have nearly two dozen practices under their belts, likely including some joint sessions with a preseason opponent. They’d also have that first preseason game in the rear-view mirror.

But this is not a normal year. Far from it.

The COVID-19 pandemic has altered life for just about every American and the NFL hasn’t been exempt. After shifting the early stages of the offseason program to a virtual setting, and spending the first two weeks of training camp focused on virus testing, new safety protocols within the team’s facility and conditioning, the Lions will formally take the practice field for the first time Monday.

Twenty-seven days later, the Chicago Bears come to town for the season opener. So buckle up.

“I said this to the team, ‘Think about where you would’ve been last night if things hadn’t changed,'” Lions coach Matt Patricia said Friday. “It would’ve been our first game. From that aspect of it, things are completely different. We would’ve been coming back and evaluating game tape already.

“We kind of have an idea of how many installs it takes to get ready to go. The different thing for us this year is without those preseason games, without travel the day before, the post-game, the day after evaluation, we actually pick up three extra days with that. So we spaced it out accordingly and put it at that target point of the third preseason game to make sure that everything is being installed so that we can go through, run and prepare to approach that week like we normally would, and put the emphasis on getting ready for the season. We backtracked it from that standpoint and made sure that we got everything in.”

This lack of practice time is unprecedented in the modern NFL, leaving Patricia to weigh the balance of safely ramping up the pace, while also ensuring there’s enough physicality in the limited time so the team isn’t unprepared when the games begin.

Because the NFL’s slate will more closely resemble college football’s buildup this year, Patricia has been looking to those ranks for inspiration.

“My resources in college football, and the guys that I know that coach at that level, were probably the first ones that I contacted going through the spring because they were in the virtual world before we were,” Patricia said. “Our offseason program started a little bit later than their offseason program or their spring program, so got a lot of guidance, a lot of advice and tried to pick their brain as much as possible on how to do that virtually. That was hugely helpful from that aspect of it.

“Then going in to training camp, certainly from a standpoint of college football, they don’t play preseason,” Patricia said. “So there is a ramp-up period that they follow and how they acclimate and get their players ready to go for the season. Those have been great tools for us to use and conversations for us to have with some college coaches.”

Inside the team’s facility, the Lions have taken every precaution, impressing players with the investment in their safety. On top of league-mandated daily COVID testing, the greatest emphasis in the building has been social distancing. To encourage players to maintain their space, prepared meals are ordered via an app, stalls in the locker room are divided by Plexiglas, and training tables and weight-room equipment has been spread out inside and outside the building.

But during practices, social distancing will go out the window. Football is a game of close-quarter contact. While there will be modifications to equipment changes and how players hydrate (no more trainers rushing on to the field and squiring water in players’ mouths between snaps), between the white lines, there is going to be plenty of contact.

In fact, there will probably be more full-contact practice segments than normal, to compensate for the absence of the preseason. 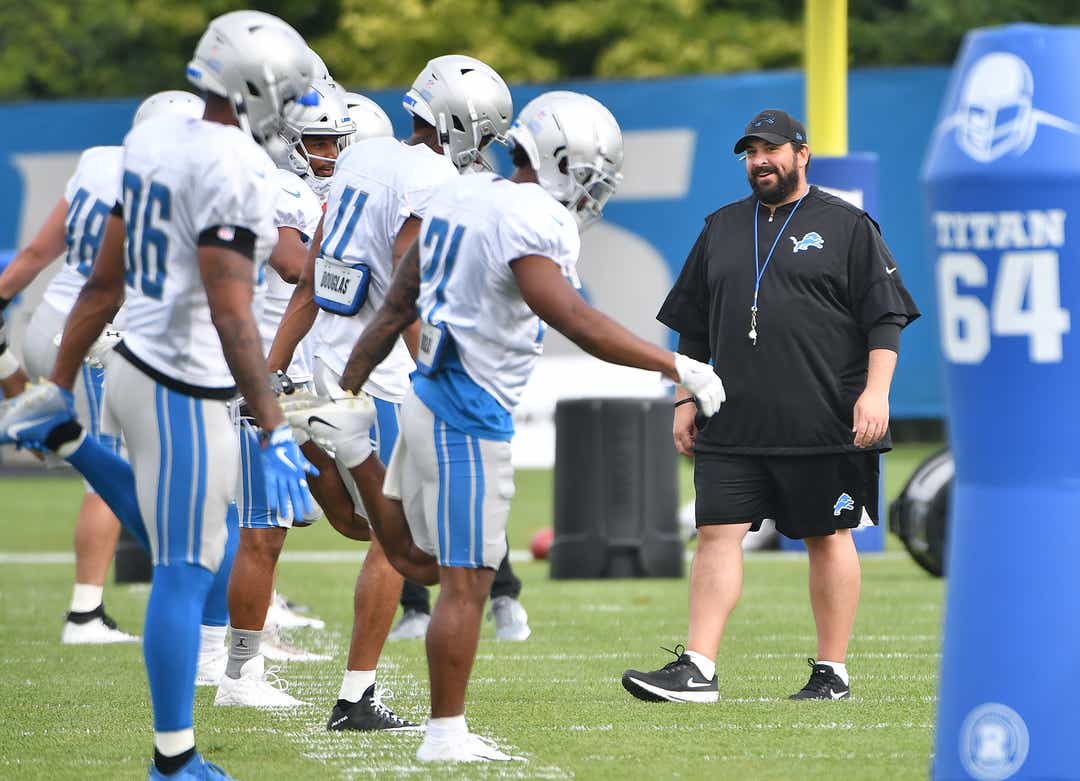 “That’s one of the biggest issues we have right now is just trying to get those tackling fundamentals full-speed and live,” Patricia said. “We do kind of mix in some live periods when we get to training camp, certainly down on the goal line. We usually do that relatively quick. One of the things we have had to evaluate is we’re going to need to tackle somebody before we get to that first game. You need to feel it, you need to see it, you need the see the speed of it.”

Another thing the team will need to simulate is a game-day environment. While the players had two weeks to adjust to the changes at the facility prior to Monday’s practice, they’ll also need to familiarize themselves with similar adjustments at Ford Field. So at some point in the next four weeks, the Lions will look to hold a practice at their home stadium before the start of the season.

“We’re working through the timeline for that and have probably narrowed that down to somewhere at the end of August and maybe the first couple of days or so of September,” Patricia said. “It’s a tricky thing. You try to put a timeline on, call it, wherever that third preseason (game) was going to be to make sure that you’re having a really good, strong practice from an evaluation standpoint.

“But certainly, when you get in that highly competitive mode, for me personally, I want to be on grass,” Patricia said. “It’s safer (for) some of the different injury situations. But I think we do need to go down to the stadium, in maybe a follow-up to that sort of timeline and schedule, and practice at a high level in the turf — feel the turf, be used to what it looks like, but also be able to see the locker room and what that’s going to be like and how we’re going to adapt.”