Tuesday’s scene outside the Lions’ practice facility looked a bit out of place.

Actually, way out of place.

In the aftermath of the Jacob Blake shooting by police in Kenosha, Wis. on Sunday, the Lions canceled practice and instead had a team meeting, replete with discussions of social justice, personal stories of police interactions and talks of moving beyond just talking.

In a sport known for its raw physicality and rugged veneer, players opened their ears and bared their souls — and just listened, just tried to understand another man’s experience instead of brushing it aside. The players sought solutions and next steps and stood unified next to a sign that read, “The world can’t go on.”

It looked more to be a scene from the NBA, where these demonstrations have become much more commonplace. During the NBA’s restart in the COVID-19 pandemic, the players advocated for the league to do more to support reform, starting with having “Black Lives Matter” printed on the court, players donning jerseys with messages supporting social justice and the league financially back minority-owned businesses. 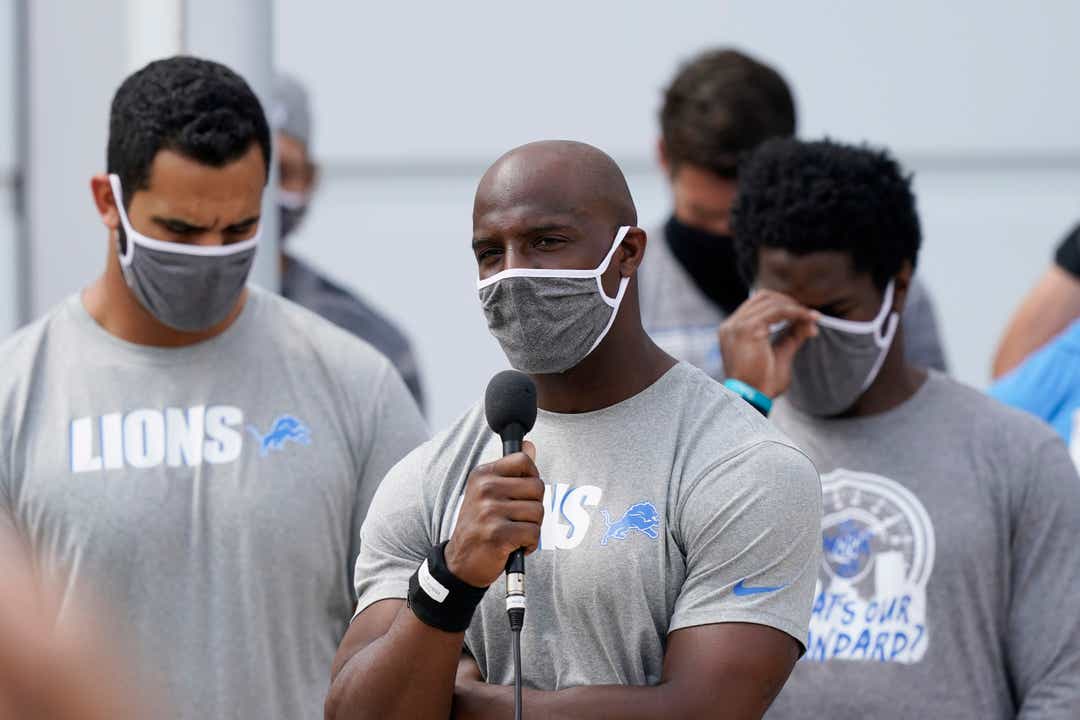 More than any other sport, the NBA has addressed the issues and has supported its players in using their platform to express their beliefs. That’s no surprise, as the NBA team owners tend to be more liberal than their NFL counterparts.

Long before the national discourse on social injustice and the killings of Breonna Taylor, Ahmaud Arbery and George Floyd became mainstream news, Colin Kaepernick was protesting against police brutality and murders and other racial disparities.

That was four years ago.

NFL commissioner Roger Goodell, appearing this week on “Uncomfortable Conversations with a Black Man” with former NFL player Emmanuel Acho, was asked what he would offer as an apology to Kaepernick.

“The first thing I would say is I wish we had listened earlier to why you were kneeling and what you were trying to bring attention to,” Goodell said. “We had invited him in several times to have the conversation and have the dialogue. I wish we had the benefit of that — we never did. We would have benefited from that, absolutely.”

Goodell admitted: “It is not about the flag. The message in what our players are doing is being mischaracterized. What they were trying to do is exercise their right to bring attention to something that needs to get fixed. That misrepresentation of who they were and what they were doing was the thing that really gnawed at me.”

The admission comes across as too little, much too late. Goodell represents the 32 NFL team owners, who — by and large — have been less enthusiastic about upsetting many of their corporate partners and season-ticket holders in the name of social justice.

“He can say whatever he wants to say now, but in a sense, if we would have taken a more stern stance and he would have listened to us in the beginning of this, there would have been so many lives that could have been saved,” Houston Texans receiver Kenny Stills told reporters this week. “There’s a lot of progress that we could have made within our law enforcement, within our police, so it’s a nice gesture, I guess, to say he wishes he would have done something different — but look at the NFL…

“We’re reactive instead of proactive when it comes to a lot of the issues in our country and within the league as well. I hope that we can do a better job moving forward of listening to our players, understanding our issues and then doing something about it.”

Jerry Jones (Dallas Cowboys) and Stephen Ross (Miami Dolphins) were among the team owners who mandated that their players stand during the anthem. Several other team owners, including the Lions’ Martha Ford, asked players to stand. Goodell maintains that no players were disciplined for kneeling during the anthem.

For what it’s worth, some in the NFL have softened their stance, including Goodell, who responded to a challenge from a group of NFL players to admit that he and the league were wrong in their dealings with Kaepernick.

That’s a step forward for the NFL, though it’s still behind the NBA, which saw the Toronto Raptors on Tuesday reportedly discussed not playing in their second-round playoff series as a protest in response to the Blake shooting.

Lions defensive lineman Trey Flowers said Tuesday that they have seen what the NBA has done and how it’s been received by the public.

“(The NBA) shedding light on certain situations the way they are, we definitely have some ideas and some conversations brewing. One thing we understand about America and about people in America is that the narrative can get shifted,” Flowers said. “We understand that it’s a sacrifice. You might step on some toes; you might ruffle some feathers, but in order for change to happen, someone has to be uncomfortable.

It’ll be worth watching to see how comfortable NFL teams and team owners feel with players actively protesting both during and after the national anthem, and bringing more attention to the social issues, with only a fraction — or no fans at all — in the stadiums.

On Sundays and throughout its season, the NFL is a big deal. Their messages on social justice should be conveyed the same way.