Overreactions are always the worst on the Monday after the first game of the regular season.

One loss to a mediocre Chicago Bears team, after four weeks of practice when everyone around the league is settling into new COVID-19 protocols, does not mean the season is sunk.

It wasn’t a good start, obviously. Anytime you blow a 17-point fourth quarter lead in an avalanche of familiar-looking mistakes, and your head coach has an I-don’t-coach-that-stuff moment when he defends his unsightly fourth quarter track record by declaring himself responsible for a Super Bowl interception six years ago, it’s cause for concern. 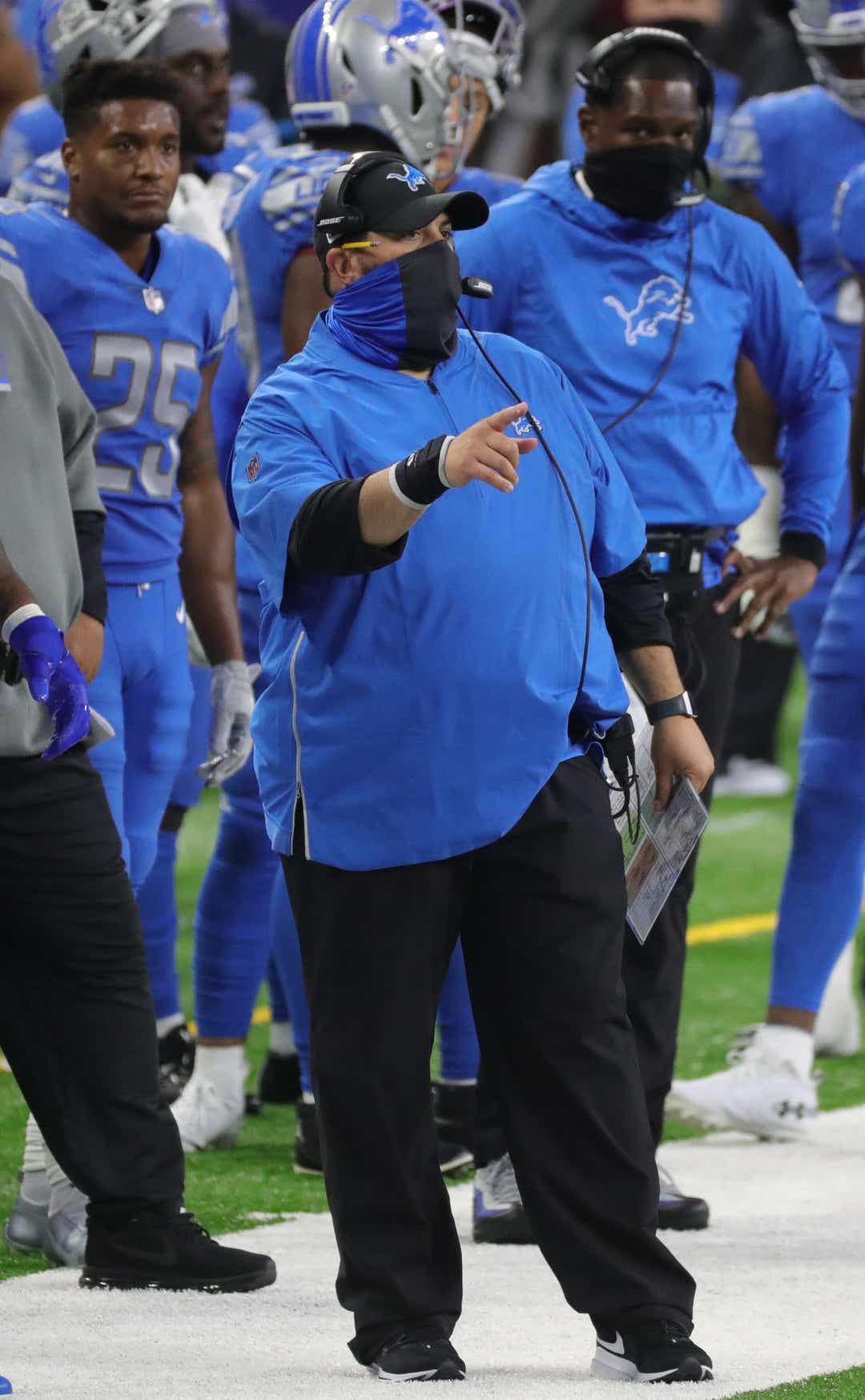 But the Detroit Lions have 15 of these things left and we’ll find out soon enough whether they’ve improved as much as they think they have or are playing out the string before getting a new leader in 2021.

Up next, is a trip to Green Bay, where Aaron Rodgers looks anything but shot and the Packers are now an impressive 14-3 in regular season games under Matt LaFleur.

For subscribers: Mitch Albom: On strangest Sunday, a too familiar finish for the Lions

In Week 3, the Lions travel to their personal house of horrors, Arizona, to face Kyler Murray and this year’s “it” team, the Cardinals.

And they close the first quarter of the season against Drew Brees, Alvin Kamara and probably the best team in the NFC, the New Orleans Saints.

Oh, and they might have to do all that with serious injury issues at the cornerback position.

The Lions lost their two best cornerbacks to hamstring injuries on Sunday, and while there’s no update yet on when Desmond Trufant or Justin Coleman will return, it shouldn’t surprise anyone if they miss time. 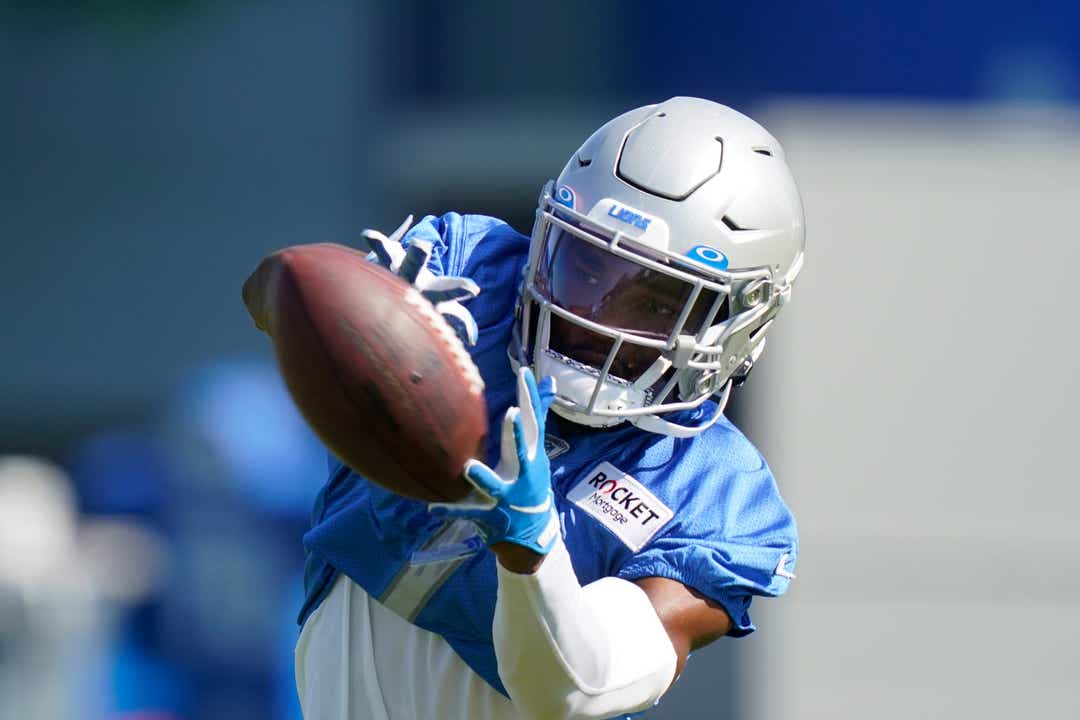 That means Jeff Okudah (assuming he’s back from his own hamstring issue) could join Amani Oruwariye and Darryl Roberts or Tony McRae in the playing group, and that’s quite the trio of quarterbacks — not to mention receivers Davante Adams, DeAndre Hopkins and Michael Thomas — for a rookie to face.

Shawn Windsor: Lions’ season-opening loss stings. But don’t give up just yet

Being undermanned in the secondary wouldn’t be an issue — or as big of an issue — if the Lions had any bite to their pass rush. But if Sunday’s loss to the Bears is any indication, not much has changed in that department, either.

Trey Flowers had the only quarterback hit by a Lions defensive lineman Sunday, which feels like something I wrote a time or two last year.

The Lions defense clearly remains an issue, though Flowers and Tracy Walker were bright spots against the Bears. Walker led the team with seven tackles and made two big run stops behind the line of scrimmage. Flowers had a sack-fumble when Mitchell Trubisky just about spun into his arms and remains the Lions’ most consistently good defensive player.

Those aren’t judgments made in haste after Week 1, and neither is this: The Lions offense will be just fine when Kenny Golladay returns.

The offense had issues Sunday, and not just in the final crucial minutes of the fourth quarter. Of the Lions’ first five possessions, three went three-and-out and the other two stalled in the red zone. Golladay’s replacement, rookie Quintez Cephus, caught just three of 10 passes thrown his way and never seemed to find a rhythm with quarterback Matthew Stafford. 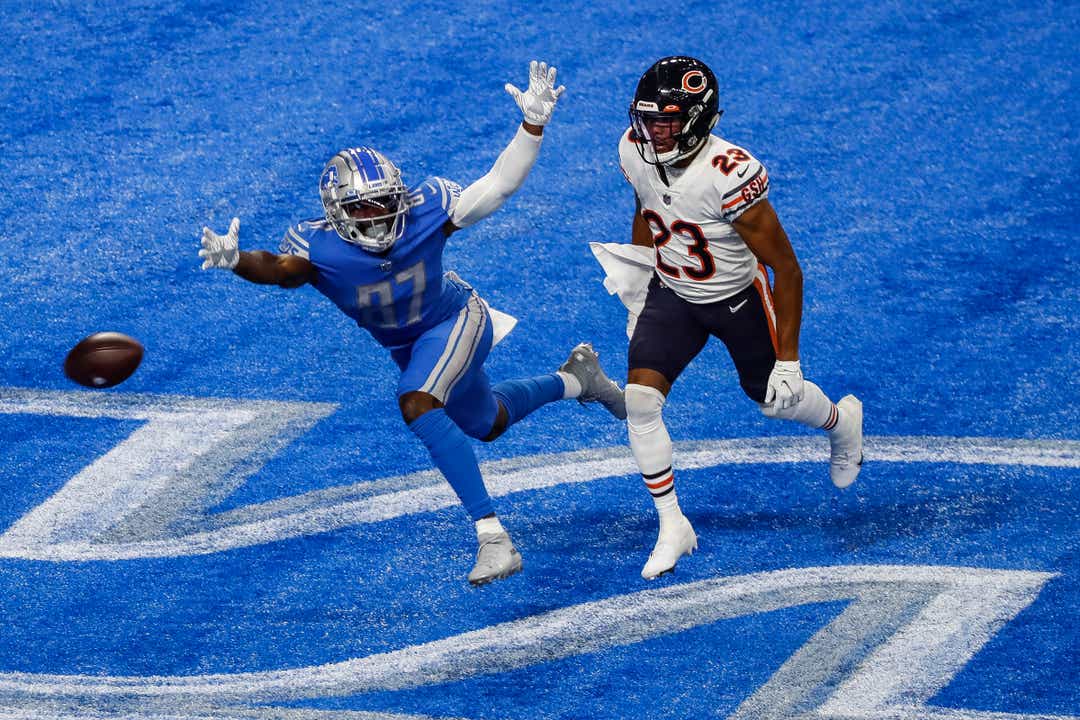 If Cephus catches even half those errant targets, Sunday’s outcome might have been different. That’s not meant to single out Cephus for the offense’s struggles, but to support something new running back Adrian Peterson said after the game.

“We have to take the good from this negative situation that we experienced today,” Peterson said. “There was a lot of missed opportunities offensively and defensively, and special teams as well. We clean up those things, we’re up by 30 points easily. So there’s a lot of good things that we’re going to be able to take away in the midst of this game.”

Being up 30 might be a tad aggressive; it’s not like the Bears didn’t shoot themselves in the foot a time or three, too. But Peterson’s broader point is the one thing we know to be true about NFL football, no matter what week it is: Mistakes are magnified in losses and minimized in wins, when the reality is the vast majority of games come down to who makes one or two crucial plays.

More: New year, new players, but Lions lose opener ‘in the most Lions ending ever’

The Bears did that Sunday. Allen Robinson laid out for an important third-quarter catch to set up Chicago’s first touchdown. Kyle Fuller grabbed a batted-ball interception late in the fourth quarter. And Mediocre Mitch made a couple nice throws down the stretch, including one to Anthony Miller for the game-winning score.

The Lions, by contrast, had a missed field goal, an offsides penalty, a dropped touchdown pass, a careless sack and that forced interception in the final six minutes alone.

Stafford was responsible for the latter two plays, and as I wrote in my post-game grades, those mistakes reminded me of something Hall-of-Fame quarterback Kurt Warner said earlier this month when I asked him about Stafford’s potential to maybe, finally lead the Lions to some success. 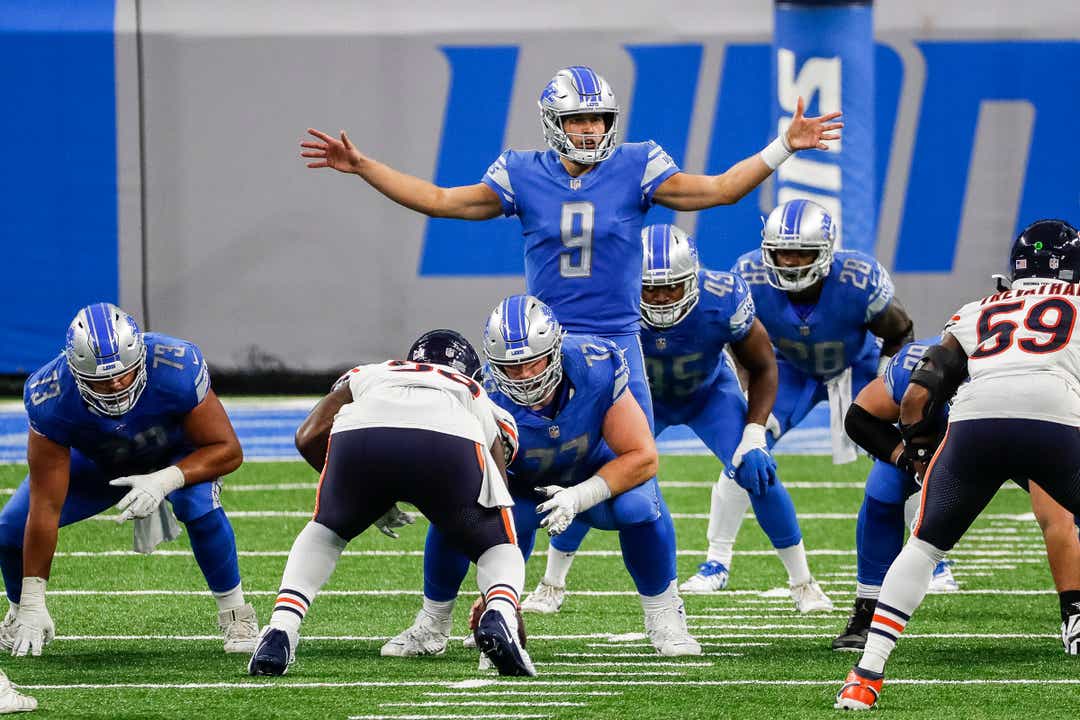 “He’s as talented as anybody in this league,” said Warner, now an analyst with NFL Network. “He’s a gifted, gifted thrower. I expect him to play well. The one thing that I’ve always felt with Matthew is just that, A, he’s been asked to do so much for that organization. He’s been asked to have to play at a certain level every single week, every single year (if) they’re going to be successful, and I think a big part in that is that he feels like he’s got to make every play. And so he can have great stretches, but ultimately that comes back to haunt any quarterback, no matter how talented you are, if you feel like you have to make every single play for your team.”

That’s what I saw from Stafford against the Bears: A quarterback who played really good football for 3½ quarters but still found his team on the precipice of losing. He had a running game, which he hasn’t for so long, but his No. 1 receiver (Golladay) was out with a hamstring injury and his defense was starting to crack, so he took a sack when he shouldn’t have, hoping to make a play, then tried to squeeze a pass into a tiny window between two defenders.

The last tailgate: Lions fans gather one more time for late Detroit Fire Captain: ‘This is for Frank’

Stafford’s mistakes were compounded when his coach, Matt Patricia, fell into a similar trap. Up 10 points with 4:08 to play and the chance to pin Trubisky deep in his own territory, Patricia instead gave the Bears life when his decision to try a 55-yard field goal went awry.

Suddenly, an offense that was its own worst enemy all day was within spitting distance of the end zone, and the Lions had to combat that sinking feeling once again.

I don’t know that feeling will be going away anytime soon, not the way fourth quarters have gone in recent history for this team.

But I do know, as disappointing as 0-1 is, it’s one game in a long season that gets short real fast and we should have a handle on where this team is headed very soon.

The Detroit Lions may lose games, but there is reason to be excited
Matthew Stafford’s trade request was a blessing in disguise
Detroit Lions sign 2nd-round pick Levi Onwuzurike to rookie deal
Open thread: Will T.J. Hockenson make the Pro Bowl again in 2021?
A question for every Detroit Lions’ position group ahead of training camp