► With Nick Bawden banged up and undrafted rookie Luke Sellers getting waived Thursday morning, the Lions are shorthanded at fullback. Instead of sliding tight end Isaac Nauta into the backfield, similar to the way the team did last season, the Lions toyed with a position switch, using linebacker Jason Cabinda in the role.

This isn’t entirely out of left field. Cabinda got a little work at fullback at the end of last season, and the franchise has gone this route before with Nick Bellore successfully flipping from linebacker to fullback a couple years back. 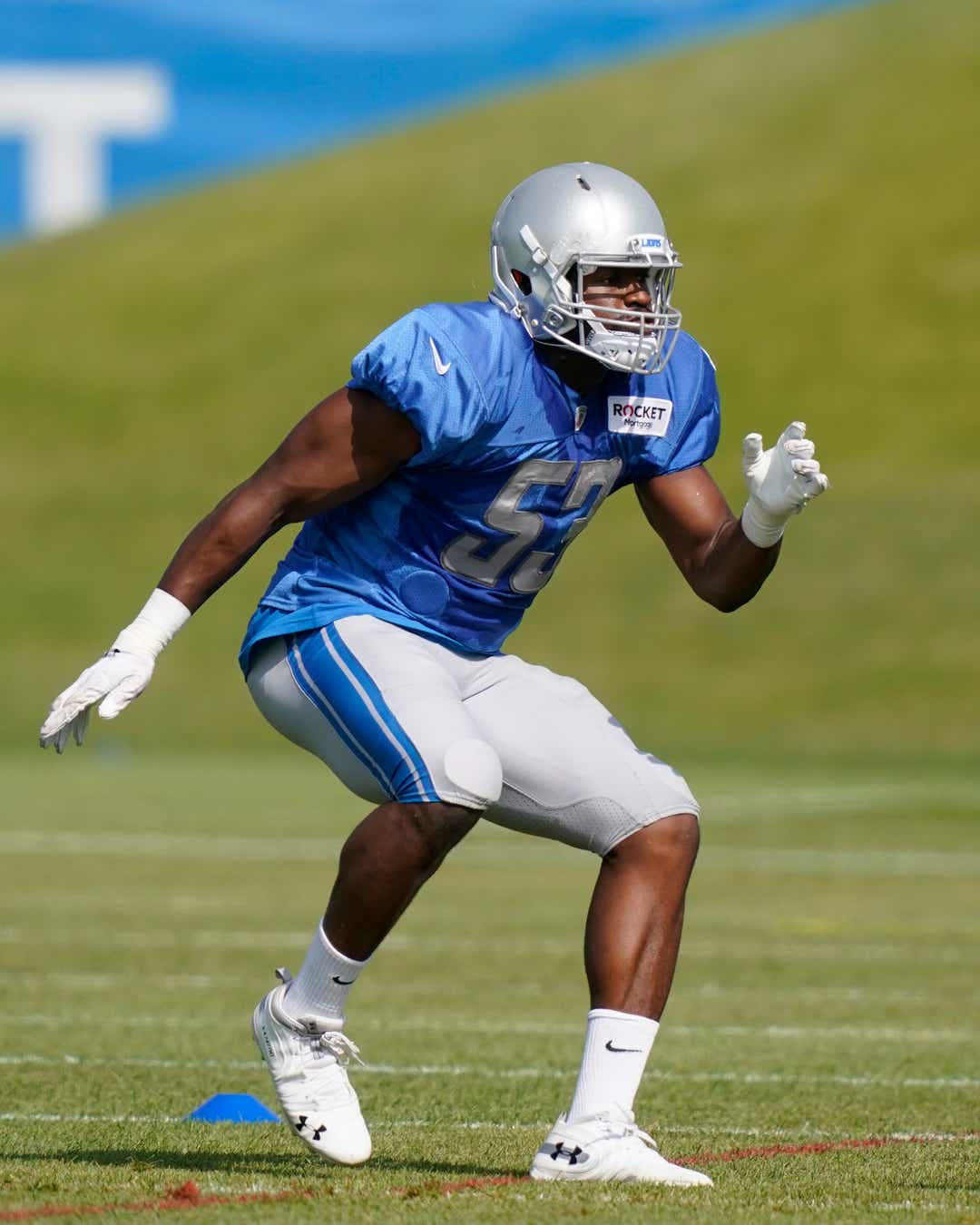 Heading into the day, if you didn’t know Cabinda wasn’t an offensive player, you’d have been easily fooled. He looked comfortable in both individual and full-team work. In a one-on-one, pass-catching segment, he surprisingly got a win against Jalen Reeves-Maybin, one of the team’s better coverage linebackers.

Cabinda also looked comfortable as a lead blocker during a full-team, short-yardage segment. Both Jonathan Williams and Ty Johnson converted with their opportunities.

Maybe it’s just a practice stopgap until Bawden gets back to full strength, but the third-year man out of San Diego State certainly doesn’t have the job on lock.

► Speaking of banged up, the Lions were without running back Bo Scarbrough for a second consecutive practice. Wide receiver Victor Bolden was also sidelined for the day. Offensive lineman Beau Benzschawel and defensive tackle Kevin Strong were both on the field Thursday after missing the first two practices.

► Jason Huntley has had his share of struggles with blocking, and that continued at the start of Thursday’s practice when Reeves-Maybin ripped by the rookie running back in a blitz-pickup drill. But Huntley rebounded with back-to-back wins against a much-bigger Jarrad Davis, controlling the charging linebacker with good leverage, power and balance. The reps each earned a roar of approval from the team’s other running backs.

Huntley also continues to be a problem for the linebackers to cover coming out of the backfield. The Lions made it clear they view him as a running back after the draft, but it’s difficult not to imagine him getting some work out of the slot. There’s also the intriguing possibility of two-back sets with either Kerryon Johnson or D’Andre Swift, which would be a nightmare formation for an opposing defense to cover in a third-and-short situation.

► Stafford was sharp much of the morning, fitting multiple balls into tight windows. One of his best throws was to tight end T.J. Hockenson, deep down the right sideline, threading it over safety Will Harris.

► Jamal Agnew caught quite a few passes on the day, getting significant targets in full-team work. Most of his routes are near the line of scrimmage, taking advantage of his elusiveness in space, but he did flash some ability to do damage deep by catching one down the seam while working against cornerback Tony McRae.

► Another receiver who had a productive day was Marvin Hall, last year’s deep-ball specialist. Getting much of his snaps with the first-team offense and running routes at different depths, Hall saw several balls his direction, including a long gain on a crossing pattern. He did drop a pass later in practice.

► Swift was briefly worked on by the trainers to address what appeared to be a muscle strain in his upper leg.

► Jonah Jackson continues to take first-team reps at right guard. Earlier this week, coach Matt Patricia tried to downplay Jackson’s practice role as part of a rotation, but it’s looking more and more like the third-round pick is trending toward a starting job.

► Rookie cornerback Jeff Okudah was better today, but still up-and-down. He played tight coverage against Kenny Golladay during a one-on-one rep, resulting in an incompletion, and also had a diving pass breakup in full-team work. Okudah nearly had another PBU, but the ball skimmed over his outstretched arm on a throw to Marvin Jones.

In run support, Okudah came up and filled his gap with authority, giving a good pop to running back Kerryon Johnson.

► It’s unclear whether it was the snap or the hold, but Matt Prater’s lone missed field goal came during a rep where rookie Arryn Siposs was serving as the holder. All three of Prater’s misses during team segments of camp have happened with Siposs holding.

► From the one-on-one pass rush segment, center Frank Ragnow continues to dominate, completely shutting down Danny Shelton on a pair of reps.